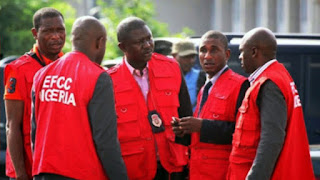 THE controversy over the $2.8 million seized from two individuals at the Akanu Ibiam International Airport, Enugu, on Thursday, has further escalated with the Economic and Financial Crimes Commission (EFCC), on Saturday, insisting that Union Bank’s claim to the fund was an afterthought.

EFCC had, in a series of tweets, on Friday, announced that it arrested two men at the airport with the combined cash in their possession.

The agency alleged that it was a money laundering operation and that its investigations were continuing.

Responding on Twitter, however, Union Bank, in four tweets of its own, said it was a routine exercise for banks to move money about.

It expressed surprise that EFCC arrested its licensed agents who were engaged in  a legitimate business.

“Movement of cash across states is routine for all banks.Bankers’ Warehouse is licensed by CBN to provide cash in transit services".

Also, Bankers’ Warehouse, a licensed Cash-in-Transit company, wrote a petition to CBN deputy governor, Mr. Ade Sonubi, complaining about the action of EFCC and the threat to confiscate the cash.

"In the petition entitled EFCC confiscation of goods in transit with Bankers’ Warehouse, the firms conveyed to you that once again we are facing a challenge with one of the security agencies (this time EFCC) who detained our couriers yesterday evening while attempting to board an Arik Air flight from Enugu to Lagos conveying currency on behalf of Union Bank. They were transporting US dollars"

“When questioned, they presented their identity cards identifying themselves as Bankers’ Warehouse employees on official CIT movement and also provided the letter of authority issued by the bank covering that movement"

“Despite the information provided, the EFCC insisted on detaining our employees, taking possession of our goods and threatening to confiscate the currency without making themselves available to our senior managers or other agencies familiar with our movements"

“This evening, our attention has been drawn to an article in the Daily Trust online as well as the EFCC website where our staff have been paraded as suspected money launderers, exposing the identity of our client and portraying our company in not just a negative but criminal light"

“We seek your intervention as a regulator to address this issue of constant harassment of our staff by security agencies, which constitutes a risk that could threaten the lives and safety of our employees and the cargo they are tasked with conveying"

“Also, kindly recall that the CBN had previously called a meeting of stakeholders regarding this issue in the past. It may be prudent to engage the stakeholders once again to provide clarity on the legitimacy, coverage and mode of operations of registered CIT operators.”

Responding, the EFCC, on Saturday, issued a statement shedding light on its actions and other related issues.

It stated: “The way forward is that investigation is ongoing. On the detention of their staff and threat to confiscate the money, this is neither here nor there. The two men arrested with the money were detained because they have to offer relevant information"

“The bank refused to honour invitation from the time of the arrest until we had to go out with the story. That was when they suddenly realised they need to honour the invitation. Be that as it may, thorough investigation has to be carried out as to the source and legitimacy of the money because we are not unaware that some financial institutions have yielded to being used to launder money.”