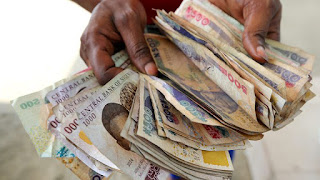 The Bankers Committee of the Central Bank of Nigeria (CBN) have resolved to introduce mobile courts to arrest and try naira abusers, currency hawkers and others. This was made known on Thursday, October 4th, 2018 at the Bankers Committee meeting held  in Lagos.

This plan was disclosed by Ms. Hamda Ambah, The CEO pf FSDH Merchant Bank Limited during a press briefing at the end of the Bankers Committee meeting.

She explained that the intent of the initiative is to encourage a positive change in attitude as regards handling the naira.

Ambah said, “We are going to be disseminating information on the right way to handle the naira so that people do not handle the money incorrectly.
“And specifically, one of the things we are frowning on and action is to be taken on people who sell the currency.
“In the near future, there is going to be an introduction of mobile court to handle such situation and those caught would be dealt with on the spot.”

Providing more insights on issues surrounding handling of the Naira, Isaac Okorafor, CBN’s Director of Corporate Communications, said the apex bank is empowered by its 2007 Act to punish cases of naira abuse with a fine of N50,000, a six-month jail term or both.

“We are collaborating with every agency of government, the Ministry of Justice, judiciary and the Nigeria Police and we would insist that those who abuse the naira would be punished,” the bank’s spokesman said.

“So it is not only hawking, if at a party, someone dances upon the naira or sprays it, that person may instantly go to jail from that party reception. Nigerians should bear that in mind. We are serious about it.”

On his part, the Director, Banking Supervision, CBN, Mr. Ahmad Abdullahi, disclosed that the Bankers’ Committee noted the challenges the economy is facing “are challenges that are not peculiar to only Nigeria but to all emerging economies.”

“However, we recognise that all hands should be on the deck for us to work together to ensure that the slowdown in economic growth is reversed so we don’t get into the same territory with south Africa,” the CBN Director said.