I came across this article and decided to share with my readers. It was titled: "Here's How To Spot An ATM Skimmer Before It Steals Your Money "

When we use an ATM, the process tends to be pretty automatic. You enter your card, your PIN number, grab your cash, card and off you go. As long as everything works and there's nobody suspicious lurking around while you do it, it doesn't require much more thought.

Unfortunately, that's what ATM fraudsters want you to think.

The truth is, criminals are getting much more clever at stealing bank information using ATMs. Once upon a time, all they could do was look over your shoulder and pilfer your card when you weren't looking, but now they can turn the ATM itself against you. They do this by using a device called a skimmer that records data off your card and lies dormant until they return to pick it up. 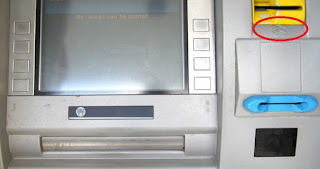 And it can happen to any ATM. While it's true that banks tend to film their machines for this reason, some daring thieves try it anyway, especially during the weekends.

Whether this has already happened to you or not, you don't have to let these people get your bank info in their clutches. There is something you can do to protect yourself from this menace. But first, you'll need a look at what you're dealing with.

Don't forget to SHARE and help your friends stop this theft before it starts.

This is a skimmer.

They're usually made to look like the card reader and can be installed over or even inside of the real one. They collect data by reading the magnetic strip on your card.

And just because your card has a chip doesn't mean it's always safe.

It's a good idea to use the chip when you have the option since it's harder to hack. Still, not everything uses the chip so you can find yourself still needing the classic, vulnerable strip to use an ATM.

However, the skimmer won't do much without your PIN number.

So thieves will also put a tiny hidden camera either near the top, by the reader, above the keypad, or in the brochure holder next to the machine to film you entering it.

However, the skimmer won't do much without your PIN number.
via Rockland Trust
And some tech-savvy criminals don't even need the camera.

Some can install a fake keypad that reads your keystrokes while you enter your PIN number. If an ATM keypad feels unusually thick, don't use it.