Smooth Robbery! Notorious Robber Reveals How He Steals Millions without a Weapon or Charm

I just read a story of a notorious robber who stole millions from Banks without using a weapon or charm. Funny but true; the 34 year old Ibrahim Abdulamdi who was paraded by the Lagos State Police Command said he usually carried big bags into the banks acting like he came to make bulk deposits. 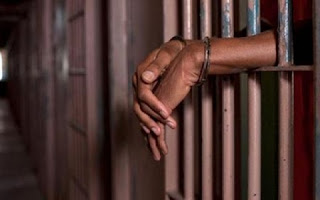 He confessed to using the same technique with all banks and his last operation in FCMB fetched him N1.25million. He said “I am not an armed robber. I go into banks to steal not to rob. When I get there I pretend as if I want to pay in some money. For instance when I went into FCMB bank to withdraw money, I went straight to the bulk room because the bank operatives were careless. There was nobody there when I went to the bulk room and picked up the money. I am telling you exactly what happened.

“Why I say that the bank operatives are careless is because one of the cashiers was reading when I went into the bulk room and she did not see me” he said.

He denied ever using pistol or charm but maintained that he was smart.

The story really sounds funny to me but on a very serious note, bankers and bank customers must be very vigilant while carry out a transaction.