A while back I heard a sad story about a brave bank employee which I will like to share on this platform. Mr Awo (Made-up name to protect the individual’s identity) was the Branch manager of one of the southwestern branches of a regional bank, a hardworking, dedicated, loyal family man who loved his job and was excellent at it. He had worked as a branch manager at for 4years. 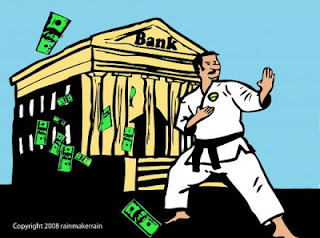 One fateful evening in March after close of business, he and his staff were working to balance the branch’s books and close for the day when tragedy befell them, their well secured branch was invaded by armed robbers. The leader of the gang shot into the ceiling 3 times to drill fear then announced that the Bank manager step forward, a shaky Awo stepped out from behind the counters and introduced himself as the branch manager. The lead robber asked Awo to lead him and his gang to the vault, trying to protect his bank, the Branch Manager told the robber the funds had already been moved out by bullion services and the only funds in the branch were the ones behind the counter. The robbers bought it until they noticed what was behind the counter was insignificant and insisted on seeing the vault for themselves.

At this point, Awo knew he was in a lot of trouble and started to give excuses on why he cannot access the vault, the robber could tell he did not want to cooperate and was not saying the truth.  Awo lost his life that day and the robbers still made away with all the money in vault both Naira and hard currency.

Sadly, the man was attempting to protect his customers and bank and lost his life in the process, a brave gesture but sadly, misplaced bravery. “Misplaced” because every bank in Nigeria is mandated to insure its liquid assets to a certain cap, this regulation is strictly adhered hence NO BANK STAFF is expected to protect these insured assets with their life. Whatever is stolen is immediately replaced by the insurance companies.

My heart goes out to MrAwo who survive by Wife, 3 children and siblings. May his soul find rest.

Hmmm.. so sad, pple don't know these things. Thanks