As usual, iBankNg waka reach news platform online to discover something surprising and worth sharing with you. Thus, seat and read below: 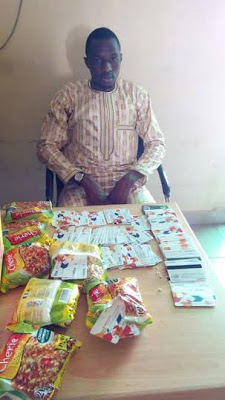 The Economic and Financial Crimes Commission EFCC is currently investigating a case of ATM racketeering involving one Muhammadou Ibrahim who was arrested while on transit to China for carrying 130 ( one hundred and thirty) Automated Teller Machine, ATM Cards of two different Nigerian banks and a Chinese bank, concealed in a carton of Cherie instant noodles.

The suspect was nabbed at the Mallam Aminu Kano International Airport, Kano. Upon being interviewed, he claimed to be a Nigerien with passport No. 09PC71337, bearing Muhammadou Ibrahim. However, preliminary investigation revealed that Muhammadou is a businessman that deals in costume jewelry at the kasuwan kofar Wambai market in Kano.

The suspect will be charged to court as soon as investigation is concluded.
Wilson Uwujaren Head, Media&Publicity(EFCC)